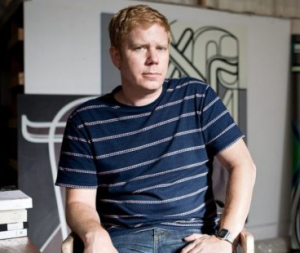 I was born in Amarillo, Texas and completed my education at the California Institute of the Arts. Since this time, approaching two decades now, I have worked as an artist and educator residing primarily in Los Angeles and most recently in New Mexico. I make paintings and drawings that have their basis in abstraction, but almost always incorporate some degree of recognizable imagery. Terms such as pop abstraction, neo hard-edge, and post painterly abstraction, to name a few, have been used to describe my work, situating it within a larger painting discourse. Stylistically, the work is bold with clean and graphic lines that are used to describe the forms within the paintings and drawings. More recently, however, and for reasons I attribute to living in New Mexico, the work has become less singularly flat and graphic, engaging, instead, a variety of spaces and techniques. Existing in an environment of such indescribable beauty has impacted the way I the treat surfaces in my paintings and drawings. Ambient washes collide with flat surfaces in ways that relate to my own experiences of the land and the skies here in New Mexico. This, of course, is nothing new considering the extensive history of artists residing in New Mexico similarly affected by the landscape. While the mainstays of my visual vocabulary such as typography, architecture, and mid-century design, to name a few, have remained intact, they have been complicated by these new experiences in ways not altogether different than artists of the past. The result is work that sets out to achieve a visual complexity that upholds the notion that painting and the language of painting can occupy a space inherent to its own, affected by its surroundings, allowing me to conflate such disparate visual tendencies to create a personal, idiosyncratic, and nuanced body of work that could not have been produced in any other environment than New Mexico itself.