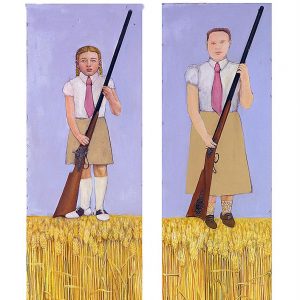 I am the daughter of Christine Marie Weishar and Robert Lee McDonald. I was born in the Midwest as were my parents. My parents’ parents grew up on farms in Illinois and Missouri. Their parents came to America from Scotland, Ireland, France, and Germany. Christine and Robert were part of the restless generation of World War II. Robert was exhibiting the signs of an “anxiety of place” common among returning vets. They belonged to the generation that separated from the families that had lost their homes and lands to the Depression. The McDonalds moved their family to locations in the West and the East following employment opportunities before settling in Nebraska with their four young children. My sister and I both inherited that “anxiety of place.” At different times, we have both lived in locations in the West and in the East following employment opportunities before settling in New Mexico. I started visiting New Mexico in 1996. My sister and her husband had purchased a remote ranch in the mountains here a few years before; it was dusty and harsh. I didn’t like it much but over the years it has left its mark on me. I have gone from visitor to squatter. My understanding of my new geography can’t be separated from all the cultures that have fought and postured to occupy this America before me. I am tied to this place and these people, and to a sister who keeps rescuing people, towns, starving dogs, horses and goats that in the blink of an eye find their way into my paintings creating havoc. I am tied to a visual story that is bound up with the daily life, the politics, the histories, the harshness and silliness of it all.