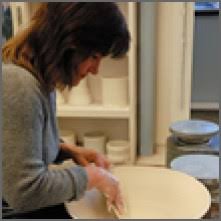 Kathryne grew up in Michigan and traveled west to study Fine Arts at Arizona State University. She received a BFA in Ceramics in 1984. Kathryne considered handmade pottery an art form, even though ceramic sculpture was the direction in the arts at the time. Functional ceramics was only considered art, if broken shards were arranged expressively on the top of a pedestal. She wanted to think of herself as a potter, and life with clay seemed like a good one. Kathryne relocated to New Mexico in the mid 80’s, where she felt a connection to the land and the art in process upon holding a pueblo pot.
Kathryne was introduced to the process of creating porcelain vessels from Arita, Japan in 1988 through the University of New Mexico Art Education program. The unique course was taught by Professor Jim Srubek, who studied under Sensei Manji Inoue of Arita, Japan. This art emphasized a track of study, the use of handmade tools and the potter’s wheel spinning clockwise. Kathryne appreciated the refreshing regard for functional form and the emphasis on creative process. Kathryne then decided to study this porcelain art as it was traditionally practiced in Japan. She worked in the studio as a graduate assistant from 1991 to 1996.
She received a Masters Degree in Art Education in 1996 and the equivalent of an MFA in Arita Porcelain Vessels. She became a teaching assistant from 1996 to 2001. When Professor Srubek retired, Kathryne was selected by Manji Inoue to continue to teach the Arita porcelain process at UNM and to maintain the international relationship with Arita, Japan. From 2001 to 2010 Kathryne was a part time instructor in the Art Education Program.
Beginning in the fall of 2010, she transitioned the Arita study to the Department of Art and Art History where she became an Assistant Professor under the guidance of Professor David Craven (d. 2012). The University of New Mexico is the only higher education institution with an authorized faculty to teach this art form outside of Japan.
Kathryne has traveled to Japan four times. In 1996, with a group of students and Professor Srubek, she took part in a ceramic exposition. In 1997, she was selected by Manji Inoue to study in Takeo, Japan as an artist-in-residence. In 2004 and 2009 she led groups of her students to Arita as guests of Sensei Manji Inoue who today holds the title of an Important Intangible Cultural Property of Japan, a ‘Living National Treasure.’
When creating, studying and teaching within the 400 year-old Arita process, Kathryne is guided by the nature of the clay and it’s connection to the past. Yet she is inspired by the shape of land and color of the light in New Mexico to create porcelain that reflects a present aesthetic.