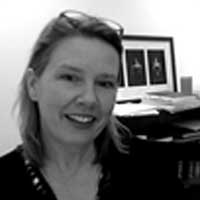 Margaret Jackson is a scholar of art and visual communication in the ancient Americas. A specialist in Moche imagery and iconography, she received her doctorate in Pre-Columbian Art History from the University of California Los Angeles. Past field research in Peru focused on ceramic production at the site of Cerro Mayal in the Chicama Valley, and the Huaca de La Luna at Moche. Additional research interests include the visual cultures of ancient Mesoamerica and studies of notation and visual literacy. She is an active member of the College Art Association, the Institute for Andean Studies, the Society for American Archaeology, and currently, the President of the Association for Latin American Art. She is a former Faculty Fellow at the Stanford Humanities Center and a Cotsen Fellow with the UCLA Cotsen Institute for Archaeology. Her publications include a co-edited volume, on Invasion and Transformation: Interdisciplinary Perspectives on Images of the Conquest of Mexico (2008), and a recent book, titled Moche Art and Visual Culture in Ancient Peru (2008).