The Art History program emphasizes the study of visual art as a means of understanding the intellectual and cultural history of humanity.

The program provides a firm grounding in global art history within the context of a liberal arts education. Undergraduate work covers the broad range of art history leading towards graduate work for the M.A. and the Ph.D. degrees, organized into two major concentrations: Art History and Arts of the Americas. The curriculum in each area of concentration is nationally and internationally recognized. 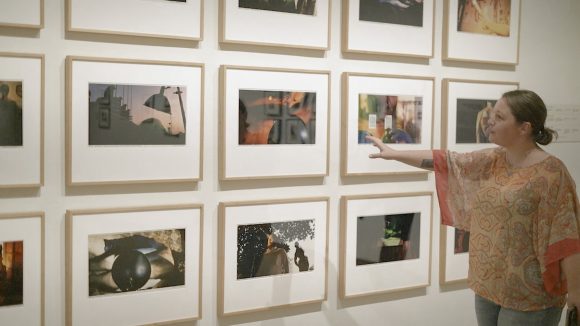 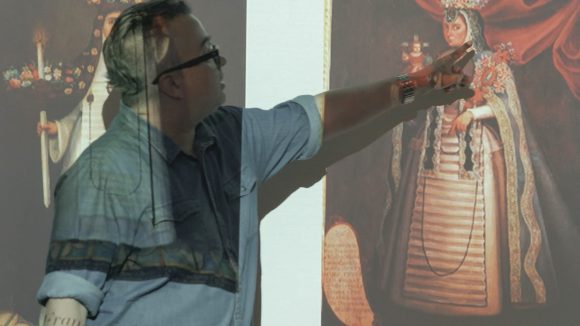 The concentration in Art History encompasses the entire field of art historical studies and is grounded in a cultural analysis of artistic expression. A broad variety of objects are explored, ranging from the traditional fine arts to popular and innovative media. Such contextual approach and wide-ranging theoretical frameworks together with more traditional studies of style, iconography, and medium, illuminate the visual arts within the intellectual and cultural history of humanity.

ARTS OF THE AMERICAS

Arts of the Americas brings together the arts of pre- and post-contact cultures of North, Central, and South America. Integral fields of specialization include Mesoamerican, Central and South American art, architecture and performance arts, ancient and modern Native American arts, Spanish Colonial art and architecture, and nineteenth through twenty-first century Latin American arts. This concentration promotes the study of continuity and discontinuity in the history of art and architecture in the Americas.

HEMISPHERE: VISUAL CULTURES OF THE AMERICAS

Hemisphere: Visual Cultures of the Americas is an annual publication produced by graduate students affiliated with the Department of Art and Art History at the University of New Mexico (UNM). Hemisphere provides a forum for graduate students to present scholarship and studio practice pertaining to all aspects and time periods of the visual and material cultures of North, Central, and South America, and related world contexts. Through the production of Hemisphere students promote their educational and professional interests as they gain first-hand experience in academic publishing. Although the inaugural issue highlighted essays, reviews, and artwork by graduate students from the Department of Art and Art History at UNM, subsequent editions consist of work submitted by graduate students at other universities in the United States. The journal welcomes and will continue to accept submissions from authors at other institutions in and outside of the United States. A call will be sent out each year to invite submissions for the next issue.

The Graduate Program (both Masters and Ph.D.) in Art History at the University of New Mexico ranks among the top three or four nationally in the study of art, culture, and politics from Latin America. A major reason is the unsurpassed number of graduate faculty lines committed to this area by a department that includes ten full-time art historians. The faculty members in fields focused on art from Latin America, all of whom are affiliated with UNM’s internationally recognized Latin American & Iberian Institute, are as follows:

Ray Hernández-Durán, Ph.D., from the University of Chicago Associate Professor, Art from the Spanish Colonial Period

In addition to these faculty members, who have published numerous books and articles in the field, there are a remarkable number of invaluable resources – including a virtually unparalleled collection of rare books, unpublished archives, prints, and photographs – in the UNM Library System and its University Art Museum. Foremost among these holdings is the Slick Collection of Posters and Prints from Latin America, some 12,000 strong, that includes one of the three most comprehensive sets in the country of silkscreen, as well as photo-offset, posters from Cuba, Chile, Nicaragua, and Puerto Rico. Only the Library of Congress and the Center for the Study of Political Graphics in Los Angeles have larger and more important collections.

Similarly, the University Art Museum and the Center for Southwest Research at UNM together house over 500 linocuts and lithographs by the Taller de Gráfica Popular of Mexico (1937-1977), along with scores of engravings by Mexican printmaker José Guadeloupe Posada. The TGP collection is the second largest in the US, and it encompasses several entire portfolios, such as the 1947 Estampas de la Revolución Mexicana, in addition to the rare TGP book Libro negro del terror Nazi (1945). Moreover, the Center for Southwest Research has on microfilm the unpublished archives of the Taller de Gráfica Popular, covering all existing correspondence, as well as related documents about patronage, group meetings, and aesthetic aims from 1937-1960. Further complimenting the huge print collection at UNM are the lithographs by contemporary artist from Latin America like Juan Sánchez, José Bedia, and Liliana Porter found at the Tamarind Institute of Lithography at UNM, the most famous institute in the world devoted exclusively to producing lithographs. Overall, the University Art Museum and Tamarind Institute at UNM possess almost 4,000 prints from all periods in the history of print media.

The photography collection housed both in the Zimmerman Library and in the University Art Museum is also extensive, numbering more than 5,000 in the former and 6,000 in the latter. Among the hundreds of rare photos from Latin America are works that range from those by Tina Modotti and Agustín Casasola to those by Manuel Alvarez Bravo and Luis González Palma. This collection of photography within the University Art Museum ranks among the finest in the nation. Added to these campus holding in the visual arts are other exceptional artworks from Latin America in various media, such as Spanish Colonial Period paintings like Juan Correa’s Mary Magdalene (1680) in the University Art Museum or Jesús Guerrero Galván’s imposing fresco painting, Unity of the Americas (1942-43) on the east wall of Scholes Hall or Luis Jiménez’s commanding public sculpture Fiesta Dancers (1996), which is located on Cornell Mall in front of the Fine Arts Center.

The combined library holdings from Latin America and Iberia at the Zimmerman Library of UNM are recognized worldwide as one of the three best in the US, along with those at Bancroft at the University of California, Berkeley and the Benson at the University of Texas, Austin. The great strength of UNM in this area first emerged in the 1930s with acquisition by UNM of two eminent private libraries, those of Paul Van de Velde and Thomas B. Catron. Comprising more that 20,000 volumes from Mexico, Spain, and Portugal, these two libraries today still form the core of Zimmerman’s rare and specialized book holdings from Ibero-America, which in total numbers more than a half million books, pamphlets, and periodicals. They are both particularly rich in books about Mexico’s political history, anthropology, and religious history.

Other significant collections of Ibero-American Materials in the Center for Southwest Research within Zimmerman Library at UNM are as follows:

1. The Turpen Collection of Primary Sources about the Mexican Revolution: over 6,000 in total.
2. The José Toribio Medina Collection — 1st editions written or edited by Medina and published through the Ercilla and Elzeviriana Presses.
3. The Latin American Travel Narratives Collection – Accounts published from colonial times to 1900.
4. The Mexican Bookplate Collection – Individual and institutional bookplates from the late 18th century to the early 20th century.
5. The Oaxacan Research Collection – Rare Oaxacan newspapers and magazines (1840s to the 1930s), as well as Indian grammars, historical treatises, political broadsides, and unpublished manuscripts by authors like Antonio Peñafiel and Manuel Martínez Gracida. It gives an expansive portrait of life in this region from the pre-Columbian period through the early 20th century.
6. The Collection of Maxmilian-French Intervention Materials – Publications from 1861-1867 by Mexican, French, North American, Austrian, and German authors, supplemented by manuscripts, political ephemera, photographs, and newspapers.
7. The Collection of Mexican and Luso-Brazilian Almanacs and Candarios – Yearbooks from the 19th and 20th century.
8. New Mexico Archives & Spanish Colonial Documents Collection – Primary resources in reproduction from various Spanish and Mexican archives, covering the civil and ecclesiastical administration of the Viceroyalities of Peru and New Spain from the 16th century to the 19th century.
9. Columbian Quincentary Archive – Primary and secondary sources on 1992 anniversary.
10. Brazilian Small Press Collection – Materials since 1940, including 5,000 examples of the cordel
11. Portfolios of Prints by Carlos Mérida of Guatemala.
12. The Monica Kupfer Collection – Books, catalogues, etc., about art from Panamá in particular and Central America in general.

Among the other notable materials at the Zimmerman Library of UNM are several collections of personal papers compiled by scholars while doing research in Latin America. They include the following:

1. The Personal Papers of France V. Scholes – Consists of Scholes’ correspondence with distinguished Latin American historians and anthropologists, covering topics about the ethno-history of early colonial Mexico.
2. The Personal Papers of Margaret Randall – Consists of primary sources from her time in Mexico in the 1960s, Cuba in the 1970s, and Nicaragua in the 1980s, along with materials about the efforts of the Reagan Administration to deport her from the US for political reasons during the 1980s. Many documents relate to her career as a poet.
3. The Personal Papers of David Craven – Consists of around 200 rare books, catalogues, and pamphlets as well as unpublished manuscripts from the Sandinista years in Nicaragua, which the author collected while doing research in that Central American country. There is a smaller collection of materials relating to Cuba in the 1980s, based both on his research there and on his work as a translator for Cuba’s most well-known art critic Gerardo Mosquera.

For several years, there has been a concerted effort to bolster the holdings of UNM in Central American, especially Nicaraguan, literature about art, culture, and politics. A net result has been the acquisition of such rare volumes as a complete set of Ventana, the Cultural Supplement of Barricada, the official newspaper of the Sandinista National Liberation Front from the early 1980s until the mid-1990s. UNM is now the only institution in the US with a complete set of Ventana. Other rare volumes have also been added through a convenio between the Universidad Centroamericana in Managua and the University of New Mexico. These holdings plus others on Guatemala, Panamá, and Costa Rica, make UNM’s collection of volumes on Central American art and culture one of the two or three best in the United States.

Susanne Anderson-Riedel is a historian of Modern European Art and a specialist in the history of prints. Her scholarly interests include 18th and 19th-century prints and...

After earning her Ph.D. from UCLA in 2002, Justine Andrews joined the faculty of the Department of Art and Art History at the University of New Mexico in 2004. Professor Andrews has worked extensively in the...

Kency Cornejo is an Associate Professor of Art History at the University of New Mexico where she teaches Contemporary Latin American and Latinx Art Histories. She received her PhD in Art History and Visual Studies from Duke University, her MA from UT Austin, and her BA from UCLA. She is also a proud first-gen...

Born and raised in New Jersey, Kevin Mulhearn attended Haverford College, receiving a BA in History. After serving as a Congressional speechwriter and working in various capacities at museums in New York, including...

I identify as a scholar of the visual and material culture of the first British Empire, and the British diaspora in the US, Caribbean, and India. My teaching encompasses topics such as surveys of British Colonial and U.S. Art, American Landscape...

Margaret Jackson is a scholar of art and visual communication in the ancient Americas. A specialist in Moche imagery and iconography, she received her doctorate in Pre-Columbian Art History from...