through a generous gift from the Frederick Hammersley Foundation, the Department of Art launched the program that invites prominent contemporary painters from around the world to come live and work in Albuquerque.  The mission of the visiting artist program is to honor the legacy of Frederick Hammersley and expand awareness of his life and work through the establishment of links to some of the most visible painters working today. Funding for this program is provided by the Frederick Hammersley Foundation and administered by the Albuquerque Community Foundation. Through this program, visiting artists are provided with accommodations at The Hammersley House, a studio near the UNM Department of Art graduate students, and conduct studio visits with the Fine Arts Graduate candidates, hold workshops, a public lecture, and an open studio event. 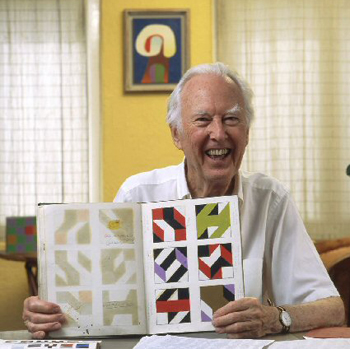 Frederick Hammersley (1919-2009) spent most of his formative years, time as a student, and early career in California, where he garnered a reputation as an important abstract painter in the west coast scene (a prominent figure in the genre of mid-century hard-edged abstraction).  In 1968 Hammersley moved to New Mexico and accepted a teaching appointment at the University of New Mexico.  Hammersley resigned from teaching in 1971 but continued to live and work in Albuquerque for the remainder of his life.  He was awarded a prestigious Guggenheim Fellowship in 1973 and received NEA grants in 1975 and 1977.  More can be learned about Frederick Hammersley by visiting the Foundation’s website (www.hammersleyfoundation.org). 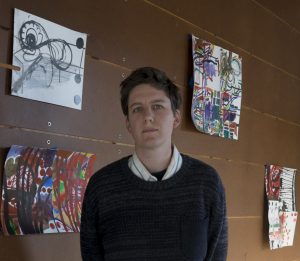 Fox Hysen is a painter born in San Rafael, California in 1982 and grew up in the Bay Area.

She received her BFA from New York University in 2006 and her MFA from Yale University in 2015. She currently lives in Norfolk, CT where she also runs an artist residency called Greenwoods, 2058.

Solo exhibitions include Soloway Gallery in Brooklyn, Gallery 16 in San Francisco, Lehtinen Gallerie in Berlin, The Suburban in Milwaukee Wisconsin, and Marcello Marvelli Gallery in New York. Hysen has been part of numerous group shows nationally and abroad including Capital and Et al. in San Francisco, Basilica Hudson, New York, Kunsthaus, Bregenz, Austria, Kunstraum Kreuzber/Bethanien, Silberkuppe, Basso, all in Berlin, Germany among many others. She was the recipient of the 2016 Tournesol award for painting by the Headlands Center for the Arts in Sausalito, CA, and is the 2022 Frederick Hammersley Visiting Artist. She has an upcoming solo show at Below Grand Gallery in NYC and is currently represented by the gallery.

Her upcoming book Painting/Dirt is a collection of four lectures given at the LeRoy E. Hoffberger School of Art at MICA in 2021. 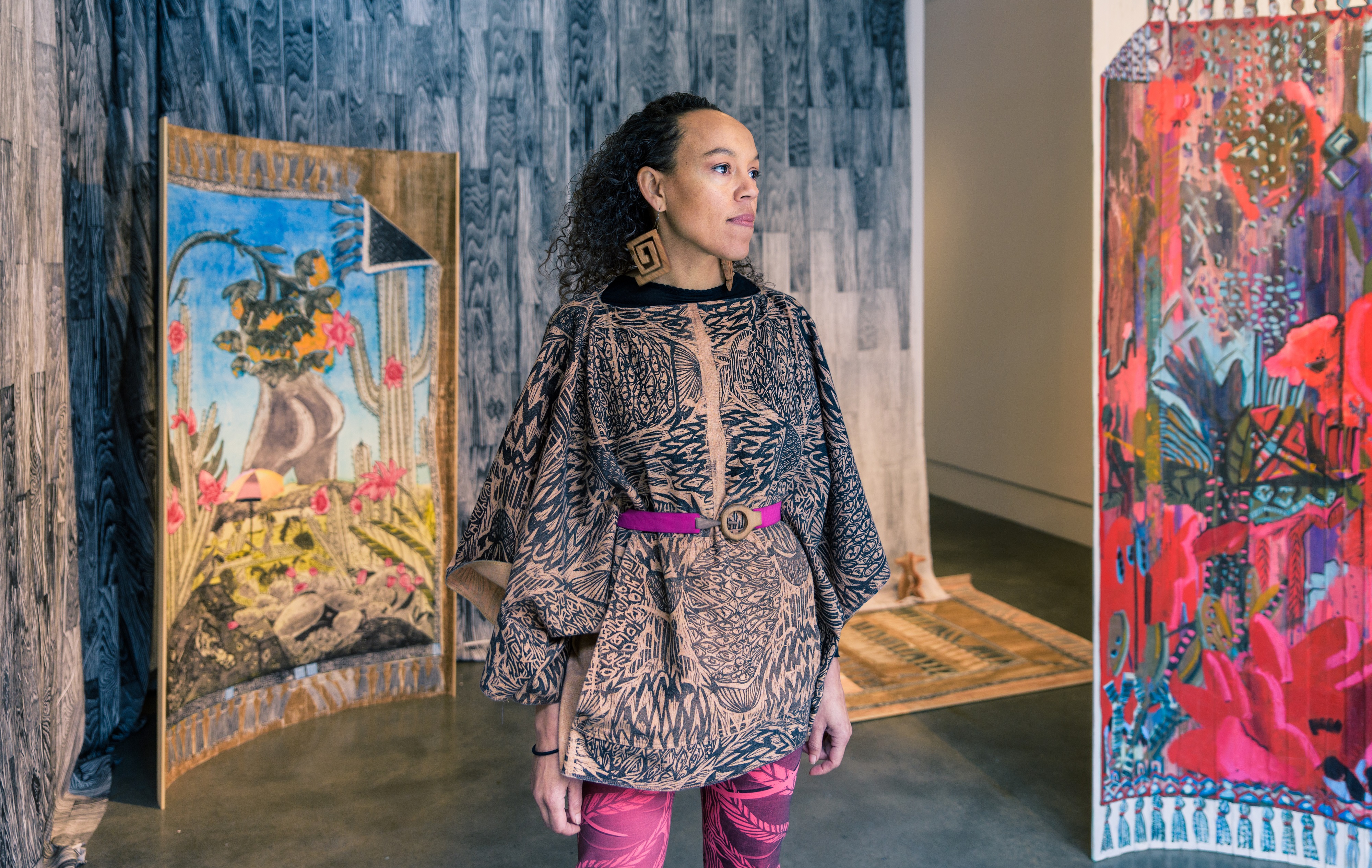 Paula Wilson is a mixed-media artist who studies and sources imagery from different cultures, geographies, and times to develop a unified, visual language of her own. Wilson frequently combines printmaking, painting, sculpture, and video into her projects. Wilson works by collaging multiple forms of visual language together: ancient motifs, tropes from Western art history, and identifiers of her home in the New Mexico High Desert. Wilson has repurposed visuals associated with Greek myths, Impressionist paintings, and styles derived from the decorative and domestic arts.

Paula Wilson received an MFA from Columbia and a BFA from Washington University in St. Louis, MO. Wilson’s most recent solo exhibitions were Entangled at 516 ARTS Contemporary Museum, Albuquerque, NM (2019), The Light Becomes You at Denny Dimin Gallery (2018), Spread Wild: Pleasures of the Yucca at Smack Mellon, Brooklyn, NY (2018), and FLOORED at Williamson | Knight, Portland, OR (2018). She has been included in four exhibitions at the Studio Museum in Harlem, exhibitions at Skidmore College (2015), Inside-Out Art Museum in Beijing (2014), Postmasters Gallery (2010), Weatherspoon Art Museum, Greensboro, NC (2010), Contemporary Arts Museum Houston (2009), Zacheta National Gallery of Art in Warsaw (2007), Sikkema Jenkins & Co. (2006), just to name a few. She has been featured in publications such as Hyperallergic, Artforum, The New York Times, the New York Observer, and The New Yorker. Wilson’s artwork is in many prestigious collections including, The Studio Museum in Harlem, the New York Public Library, Yale University, Saatchi Gallery, and The Fabric Workshop.

Please watch Wilson’s lecture where she discusses her process, influences, and experiences, and will give a short studio tour. 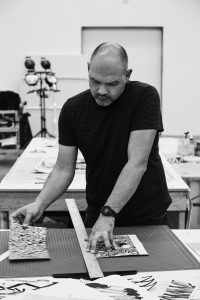 David Korty (b. 1971, California) studied an MFA at the University of California, Los Angeles (CA)(1998) following a BFA at Rhode Island School of Design, Providence (RI)(1992). Korty is a painter whose works distill the human figure, urban landscape, and still life subjects into subtle arrangements of pattern, color, and shape. Employing collage, ink, and pencil, Korty’s sensitivity to color and contour combined with his formalist interest in surface, outline, and the interplay of two-dimensional and three-dimensional space to create works that variously echo the angular configurations of origami, the simplified linearity of architectural plans, and the encoded appearance of arrayed symbols or hieroglyphs.

David Korty has shown extensively in Los Angeles, in solo exhibitions at Night Gallery, China Art Objects, Kohn Gallery and LAXART; at Derek Eller Gallery and Greene Naftali in New York; and at Sadie Coles HQ in London. Korty’s work has been acquired by the Hammer Museum, Los Angeles; the Grunwald Center for Graphic Arts, Los Angeles; the Judith Rothschild Foundation; and the Rubell Collection. His work has been covered in Artforum, The New York Times, The Guardian, and Modern Painters, among other publications. He lives and works in Los Angeles.

Korty will be in residency at the University of New Mexico for the Spring 2020 semester. He will be giving a public lecture discussing his process, influences, and experiences on Thursday, April 9th at the Albuquerque Museum at 6:00 pm. He will also be hosting an open studio on Monday, April 27th at the UNM Art Annex, room 118B at 5:00 pm. Both events will be free and open to the public. 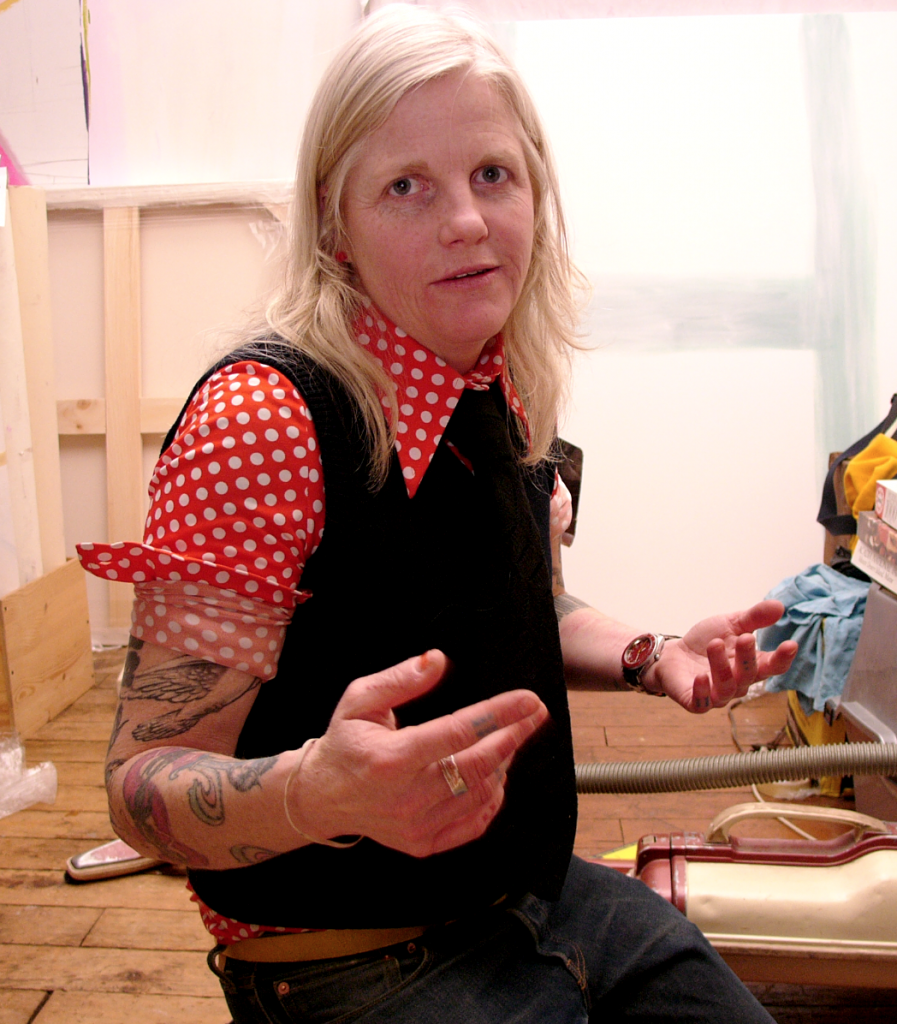 Xylor Jane (born 1963) is an American artist whose paintings “integrate mathematics, color, and time.”  Jane’s color is rarely brushed, and rather is applied “in single, unmodulated dots, sometimes as tiny as a millimeter in diameter.” Jane has worked extensively with prime numbers and the Fibonacci sequence.
Jane is also known to be highly influenced by the weather, working “according to weather conditions, revisiting one painting, for instance, only on overcast days, and another when it’s sunny out: hence, some works take years to produce.”
Jane’s painting was featured in the Bay Area Now show at the Yerba Buena Center for the Arts in 2005. Other Bay Area institutions where she has had solo or two-person shows include the Jack Hanley Gallery, Gallery 16, the LAB, and the Luggage Store Gallery.
Jane had a 2010 solo show at Almine Rech in Paris, France and a 2005 solo show at Four Gallery in Dublin, Ireland.
Xylor Jane is based in Greenfield, Massachusetts and is represented by CANADA Gallery in New York City where she has had six solo exhibitions (2005, 2006, 2009, 2012, 2015, 2016). Jane received a BFA in Painting from the San Francisco Art Institute in 1993. 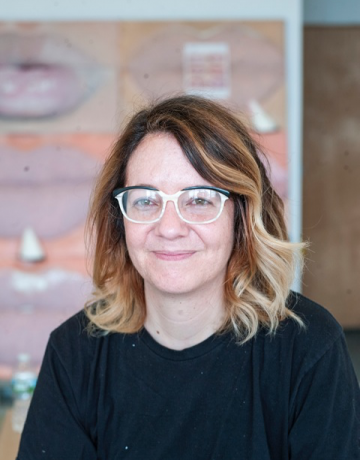 Gina Beavers is an artist who lives and works in New York City. She holds a BA in Studio Art and Anthropology from the University of Virginia (1996), an MFA in Painting and Drawing from the School of the Art Institute of Chicago (2000) and an MS in Education from Brooklyn College (2005).

She creates paintings and installations from photos culled from the Internet and social media and rendered in high Acrylic relief. Series include paintings based on the creative realms of body painting, social media user’s photos of their meals, make-up tutorials, memes, and body builder selfies. 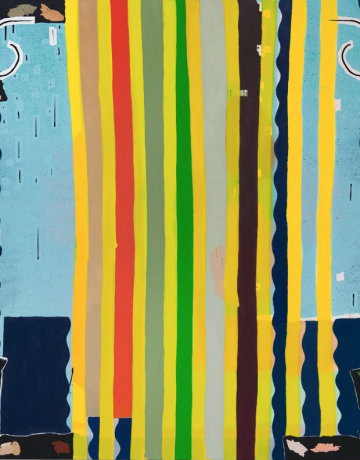 Allison Miller (b. Evanston, IL) lives and works in Los Angeles. She is represented by The Pit, Los Angeles and Susan Inglett Gallery, New York. Group exhibitions include  Kunstmuseum, Mülheim an der Ruhr, Germany, Made in LA 2012, Bregenzer Kunstverein, Austria, the Orange County Museum of Art, The Pizzuti Collection, GAVLAK LA, and Ameringer/ McEnery/Yohe, among others. Her work has been reviewed in Artforum, frieze, Modern Painters, Hyperallergic, and The Los Angeles Times, among others. She was recently the recipient of the 2017 Frederick Hammersley Foundation Fellowship and was the 2014 Richard Diebenkorn Foundation Fellow. Her work is in the collections of The Orange County Museum of Art, The Santa Barbara Museum of Art, the Pizzuti Collection, the West Collection, UBS, JP Morgan Chase and Vassar College.