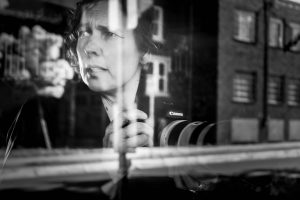 Jessamyn Lovell (b. 1977, Syracuse, NY) is an artist, educator, and licensed private investigator living in Albuquerque, NM. Lovell’s work on No Trespassing (where she surreptitiously documented her estranged father) and Dear Erin Hart, (where she found, followed and photographed her identity thief) led her to obtaining her private investigator’s license. Lovell’s work has been featured by media outlets such as Hyperallergic, Wired, This American Life, the Today Show, BBC World News, and many more. She is the recipient of several awards, including the Aperture Portfolio Prize and the CENTER Excellence in Teaching Award and was recently a Center for Teaching Excellence Fellow at UNM. Lovell is currently integrating her skills as a private investigator into her artistic practices as an ongoing conceptual art piece called D.I.Y. P.I. (Do It Yourself Private Investigation) and works with internationally known performance troupe La Pocha Nostra as a producer and performer.