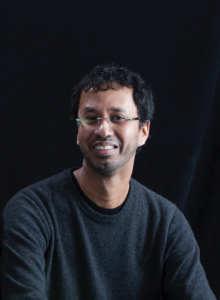 Founder and Director, Center for Environmental Arts and Humanities

Founder and Director, Species in Peril project at UNM

Subhankar Banerjee is an artist, writer, conservationist, and public scholar. His place-based and community-engaged interdisciplinary and intersectional efforts aim to advance multispecies justice to mitigate the intensifying biodiversity and climate crises. He works closely with Indigenous Gwich’in and Iñupiat community members and environmental organizations to defend significant biological nurseries from oil and gas development in Arctic Alaska, including the Arctic National Wildlife Refuge. Coeditor (with T.J. Demos and Emily Eliza Scott) of Routledge Companion to Contemporary Art, Visual Culture and Climate Change (Routledge, February 2021), Subhankar was most recently cohost (with U.S. Senator Tom Udall) of the UNM Biodiversity Webinar Series (Fall 2020), co-curator (with Josie Lopez) of Species in Peril Along the Rio Grande (Fall 2019), and convener of the last oil: a multispecies justice symposium (February 2018). His photographs have been exhibited in more than fifty museum exhibitions around the world, including Nature’s Nation: American Art and Environment at the Princeton University Art Museum (2018-2019) and the 18th Biennale of Sydney: all our relations (2012); and public and scholarly writing have appeared in many publications, including Global Photography: A Critical History (Routledge, 2020) and Ecocriticism and Indigenous Studies: Conversations from Earth to Cosmos (Routledge, 2017). For his conservation efforts, Subhankar received a Greenleaf Artist Award from the United Nations Environment Programme, a Cultural Freedom Award from Lannan Foundation, a National Conservation Achievement Award from the National Wildlife Federation, a Special Achievement Award from the Sierra Club, and was named an Arctic Hero by the Alaska Wilderness League. Subhankar is the founding director of both the Center for Environmental Arts and Humanities in the Department of Art and the Species in Peril project at UNM.